2018 NRHA Professionals of the Year Named.

Oklahoma City, Oklahoma –
Each year, the National Reining Horse Association (NRHA) affiliates are invited to nominate their favorite NRHA Professionals for top honors in one of the following categories: Professional Horseman of the Year, Professional Horsewoman of the Year, Non Pro Coach of the Year, Youth Coach of the Year, and Up-and-Coming Trainer of the Year. Nominees must exemplify excellence in the reining community and are chosen based on their mastery and contribution to promoting the sport of reining and NRHA. Below are the winners for each category, who will receive their award at the 2019 NRHA Convention & Awards Banquet held February 6-9 in Oklahoma City. 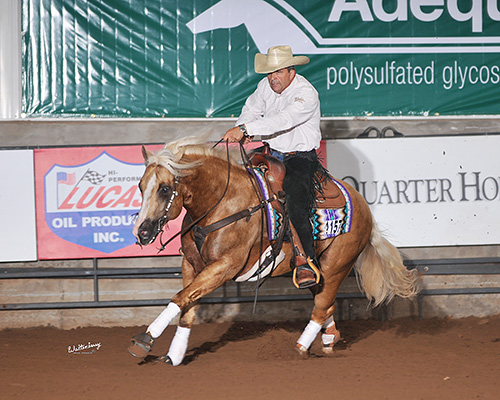 NRHA Professional Horseman of the Year – Dan Huss
Dan Huss’ career in the saddle began over 30 years ago. Pursuing his passion, he double majored in science and equestrian studies at the University of Findlay, where he stayed to teach for 20 years. It was in the early 2000s when Huss and his wife, Wendy, decided to instead pursue the training process he had developed at Findlay (breaking down each maneuver into a few steps, allowing a client to master it, and then moving on to the next). Their first stop was Double Run Farms in North Carolina, where Huss trained Wimpys Little Step, a well-known sire in the reining industry who went on to win the 2002 NRHA Futurity. The adventure didn’t stop there; Chicago, Illinois was where they then spent the next three years, developing a successful training program for non pro rider, Jose Vasquez.

In 2006, Dan and Wendy Huss were able to set up Even Odd Farms, their own training facility. Here, they made a name for themselves before moving to Scottsdale, Arizona for its potential to grow their business in the reining industry. Huss continues to coach top level non pros and youth riders at Huss Performance Horses while also bringing home big NRHA titles himself. His NRHA Lifetime Earnings (LTE) exceed $550,000 with many championship titles and finalist qualifications in the NRHA Derby, NRHA Futurity, All American Quarter Horse Congress, and many more. He also helped the U.S. Reining Team bring home a gold medal in the FEI World Equestrian Games (WEG) in 2018 where he also took home an individual silver medal. To top off his accomplishments, not only a reiner but also as a horseman, was his crowd-wowing, bridleless run on Ms Dreamy at the AQHA World Championship Show in the Senior Reining. That moment will remain a part of reining history. 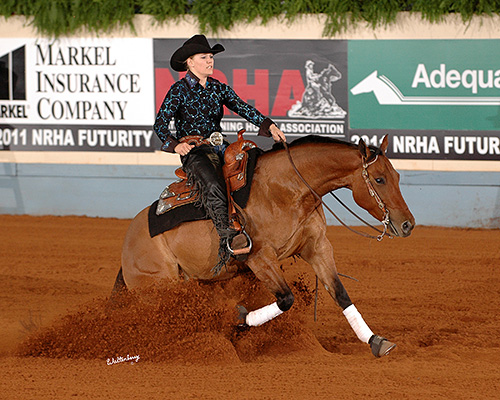 NRHA Professional Horsewoman of the Year – Abby Lengel
Abby Lengel’s passion for reining was sparked by a chance lesson taken on a reining horse with Drake Johnson, a Colorado NRHA Professional. Since 2007, when her reining career got its start in youth 14-18 and rookie competitions, the Colorado native has had great success in the show arena as an assistant trainer and as a non pro coach.

Lengel graduated with a degree in Equine Industry and Business at West Texas A&M University. Shortly after she started working as an assistant trainer for NRHA Million Dollar Rider Casey Deary. Between the trust Deary instilled in her early on with training high-end prospects and the passion she brings into the sport – from mucking stalls to training a horse off of the release of pressure – her talent is evident. She credits a great deal of success to the “corrective criticism” and encouragement Deary has provided since 2014. She continues to excel, placing high in the biggest NRHA competitions, all while keeping the trust of the horse as well as the horses’ mental health front of mind. 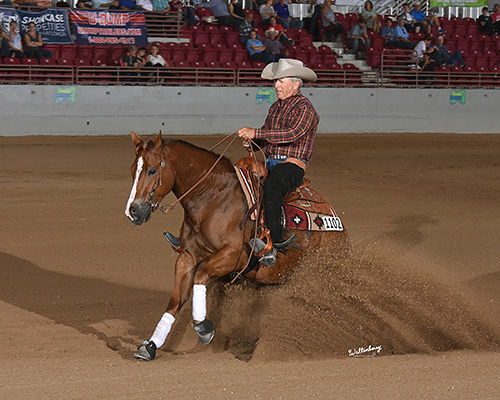 NRHA Non Pro Coach of the Year – Dave Moore
With over 20 years of experience and dedication to the sport of reining, Dave Moore has been said to “exemplify what NRHA stands for.” This is demonstrated through his promotion of reining from the local to national levels. Moore and his wife Kim live in Southwest Ranches, Florida where their ranch, Sheridan Oaks Stables, exists as a hub to many reining clinics and lessons.

Moore has coached numerous youth, open, and non pro circuit champions; however, he “does not place emphasis on winning, but being the best that you and your partner can be on any given day.” His nomination said, “He teaches his students to respect the sport and their partner.” His talents extend past teaching the skills needed to be a good horseman and successfully show in reining. The passion Moore holds for horses and reining show every time he is with a student as “he has no clue what a one-hour lesson is.” The time spent with his students always exceeds the allotted time; he even makes himself available on his days off from work. He “is very selfless and is always encouraging all exhibitors, not just the members in his barn, to be the best they can be.” During his involvement within NRHA, Moore has had much success in the show ring as an exhibitor, a judge, and most importantly, a coach. 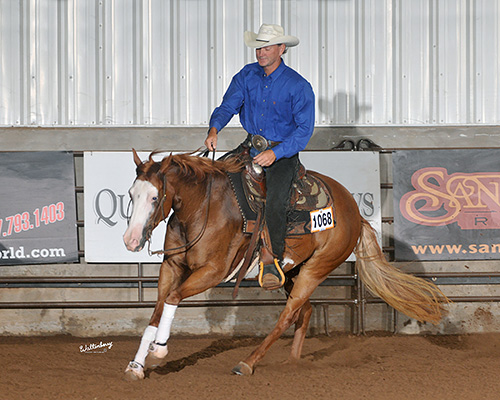 NRHA Youth Coach of the Year – Dean Latimer
Dean Latimer of Marietta, Oklahoma first showed with NRHA in 1985. With over 30 years dedicated to the sport as an exhibitor, judge, and trainer, Latimer’s knowledge of NRHA Rules and Regulations accentuates his credibility in teaching youth reiners. As an “excellent, patient mentor,” the lessons taught in the arena by Latimer carry through to other parts of life for many. His ability to never miss a step on top of his “articulate and detailed” explanations cause him to be an impeccable coach. He is known to talk his students through each maneuver of the pattern they are about to run, provide encouragement before go-time, and end with “’now go have some fun.’”

Latimer not only excels in coaching, but also in being a skilled rider in the show pen. Boasting an NRHA LTE in excess of $160,000, he has worked for both Loomis Ranch and Arcese Quarter Horses as well as shown in the NRHA Futurity, NRHA Derby, and many more elite shows. Latimer has also had individual success at the All American Quarter Horse Congress and has had many students achieve accolades in prestigious events as well—an exhibition of his premier coaching abilities! His passion for the sport doesn’t stop there. He raises, trains, and sells his own horses, sits on the NRHA Judges Committee, assists with the NRHA Judges School, and has been a large advocate in NRHA’s Respect the Horse. Respect the Sport. campaign. 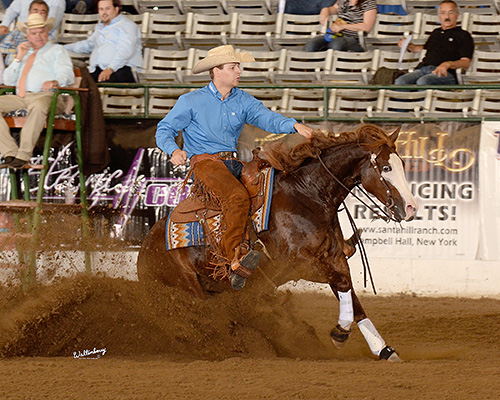 NRHA Up-and-Coming Trainer of the Year – Trent Harvey
Trent Harvey became a member of NRHA in 2013 and has had much success within the industry as both a trainer and rider. Spending a combined five years working as an assistant trainer to NRHA Million Dollar Riders Casey Deary and Jordan Larson, he has learned from some of the best in the industry. Not only does his training combine the finest techniques from Deary and Larson, but his family’s longstanding roots in the sport ignite a separate passion altogether. Dale Harvey, Trent’s father, was an NRHA Member for over 20 years, and remains a big inspiration to the reining community as a whole, even after his passing in 2017. “Following the death of his father, [Trent] has easily stepped into his shoes.”

Beyond helping future generations of reiners in Marietta, Oklahoma, Harvey continues to make big marks in the show pen. He has won many awards and titles at NRHA events such as the NRHA Derby and NRHA Futurity with over $100,000 in NRHA LTE. There is no doubt that he is qualified to earn the Up-and-Coming Trainer of the Year title as “a knowledgeable horseman and all-around good guy.”

For more information about the NRHA Professionals program or to find a Professional to help with training or lessons, visit nrha.com/professionals.

Launch of the New AQHA.com

It is with cautious optimism that this week's 440 includes an update on the launch of the new AQHA.com and the 4.0 database system. The teams have worked diligently – tested, retested and are still testing both systems – and the plan is to launch in the coming weeks.

The AQHA communications team is spearheading a multi-faceted approach to informing all audiences about the new website, and we want you to be one of the first to know about the exciting features and benefits of the new AQHA.com.

Below is a press release that will be sent to the membership on Monday, January 21. It will also be sent to affiliates, alliance partners, committee members, corporate partners and more groups that do business with AQHA on a daily basis.

As you well know, this has been a long time coming and the building is full of enthusiasm and excitement to be near the final stretch. The finish line is in sight, and we plan to be in the winners circle this time.

If you have any questions or concerns, please reach out.

Coming Soon: A New AQHA Website
The new AQHA.com will be custom built with members and visitors in mind.

Behind the scenes, a new database system will allow the website to provide more online interaction with members and customers. Online access to information in addition to online transactions, will be made simpler with this new technology. The updated system will also allow AQHA employees faster and easier access to information, assisting with timely customer support over the phone and more expedient paperwork processing. Internal training on the database system is currently in progress to ensure employees have the proper training, tools and knowledge to best serve members and customers across the globe before the new database and website are launched.

For the new website design, AQHA partnered with experts, including well-credentialed digital experience company Base22. Base22 has guided the AQHA digital team through multiple user-testing exercises and listened to valuable feedback from AQHA members and website visitors to build a custom experience tailored to the AQHA member and fan.

The AQHA.com redesign will include:

To preview the new website before it is launched, visit www.aqha.com/newwebsite. Each week, we'll post photos and videos explaining some of the improved features you'll soon be able to enjoy.

Many additional improvements will come in the months following launch. Stay tuned for more information about the enhancements.

The AQHA Customer Care team will be standing by to assist people navigating through the website or with any questions.
Contact us Monday-Friday at 806-376-4811 8 a.m. to 5 p.m. Central if you have questions after the new website is live.